John Bosco or Don Bosco (“Don” means father in Italian) was born on 16 August 1815 in a farmhouse near a small village east of Turin in northern Italy. His father died when he was only a child. He felt this very deeply and it made him want to care for young people who struggled with the same circumstances in their lives. His mother, Margaret, was a wonderful woman whose own faith made a deep impression on him.

When he was only nine years old, he had a dream that was prophetic. In the dream, he was with a whole lot of children who were playing. The problem was that they were going hell for leather and were pushing and shoving each other and swearing and cursing at each other. John didn’t like this and tried to stop them by throwing himself into the game and swearing and cursing himself and trying to force them to stop what they were doing by being just as rough himself.

But a man appeared to him who said: “Don’t hit them, you will only be able to win them over with kindness and love. I will give you a teacher who will help you to become really wise.” He didn’t realise it straight away but the man was Jesus and the teacher he was promised was Mary. He eventually placed his whole life under her guidance and honoured her with the title “Help of Christians”.

This experience led John to want to learn to be an acrobat, a magician, a singer and a juggler so as to be able to attract companions to him and to keep them far from sin. “If they are with me,” he used say to his mother “they don’t curse”.

This also led him to want to become a priest and to dedicate himself entirely to helping young people learn to love God. He used to work all day to earn his keep and would spend his nights studying what he needed to learn so as to be able to enter the seminary to become a priest. Finally, when he was 20, he was able to enter the seminary and was ordained as a priest in Turin in 1841, at the age of 26. 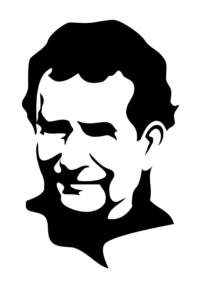 Because the Industrial Revolution was in full swing, Turin was chock-a-block with poor young people. They were either orphaned or abandoned and looking for work, and were exposed to all sorts of dangers. Don [Father] Bosco started to gather them together on Sundays, sometimes in a Church, in vacant lots, or even in open public spaces where they could play and where he could teach them about their faith.

After five years of enormous difficulties, he managed to establish his first oratory [youth centre] in an outlying suburb of Turin called Valdocco. This enabled him to provide food and accommodation for them. Eventually, he was also able to offer them a place to study or learn a trade. But, above all they learned to love God. One of his more famous students was a young lad called Dominic Savio. He was eventually canonised as a saint.

Don Bosco was loved no end by his “rascals” as he used call them. Whenever anyone asked him the secret of such success, he would reply, “I always try to win them over with kindness and love.” He spent what little money he had, his time, his most extraordinary talents and his health all to help them out. It was from among these young boys and men that he chose the first Salesians. Wishing to provide the same sorts of opportunities to girls, he founded with Saint Maria Mazzarello, the Salesian Sisters [The Daughters of Mary Help of Christians.] In his ‘free’ time, which he often snatched from his sleep, he wrote and popularised simple booklets on the Christian faith for the edification of ordinary people.

As well as being a practical man, he lived his life based on a deep love of God. His mother, Margaret, had instilled this in him from a young age. This was united with a profound sense of compassion for people from all walks of life based on humanity, kindness and a balanced attitude towards life.
He was convinced that everyone could be holy and constantly challenged his boys to love God and to accept responsibility for their own development as Christians and as good members of society. His famous quotes: “It is enough for me that you are young for me to love you” and “You will find writers far more talented than me, but, you will never find anyone who loves you and wants your true happiness more than I do“ make clear his commitment to nurturing the fragile spirits of young people. Everyone he met felt as if they were especially loved by him.

Exhausted finally by his tireless work, he fell seriously ill. As he lay dying, many of his boys offered their own life to God in exchange for his. He died on 31 January, 1888, at the age of 72. On Easter Sunday, 1 April 1934, Pope Pius XI, who had had the good fortune to know him personally, proclaimed him a Saint.